Rolls-Royce looks to the future with start of UltraFan build 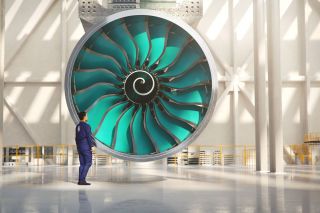 LONDON - Rolls-Royce said it had started building its new greener UltraFan engine and aims to have the first demonstrator model completed by the end of the year, in what it hopes will be a boost to both it and the environment. The new engine might rotate new Airbus or Boeing jetliner families by the late 2020s.

The British company has been hit harder than most by the pandemic, with much of its income disappearing when airlines stopped flying, leaving it to post a record $5.6 billion underlying loss in 2020.

Rolls believes a new engine will be needed by aircraft manufacturers, even if the date when either Airbus or Boeing develop a new jet has been pushed further into the future by the coronavirus crisis.

It hopes the UltraFan, which it describes as the world's largest aero-engine, could deliver a 25% fuel efficiency improvement compared with the first generation of its Trent engine.

It could be the basis for a new family of engines which power both narrowbody and widebody aircraft, and it expects the first test run of the engine to be conducted on 100% Sustainable Aviation Fuel, Rolls said.

The company's current engines power widebody jets and not the single aisle jets which sell at higher volumes and are likely to recover from the pandemic more quickly.

"It is arriving at a time when the world is seeking ever more sustainable ways to travel in a post-COVID 19 world," said Chris Cholerton, president of its civil aerospace arm. Some analysts have speculated that UltraFan, a geared gas turbine, could be overtaken by new low-carbon technologies.

But Rolls said gas turbines would be the bedrock of long-haul aviation for many years, and UltraFan's efficiency would help the transition to more sustainable fuels which could be more expensive in the short term than traditional jet fuel.

The engine's development has been supported by funding from institutions in Britain, Germany and the European Union.
© Reuters, aero.uk | Image: Rolls-Royce | 30/03/2021 08:13