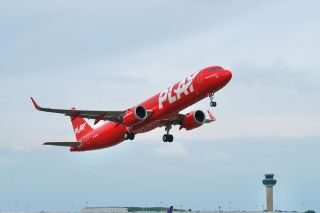 LONDON - Iceland is back on the destination boards at London Stansted as new airline Play launched its first flight from the airport to Reykjavik last week.

Using a brand-new 192 seat Airbus A321neo painted in an eye-catching all-red livery, the inaugural flight took off for the Icelandic capital June 24 just after 4 pm.

Flights will operate four times a week on Mondays, Thursdays, Fridays, and Sundays, with fares starting at £30 one way.

"We’re delighted Play has joined us at London Stansted and launched its inaugural flight from the airport," airport CEO Steve Griffiths said. "Iceland is one of the very few countries currently on the UK green travel list so it’s a great alternative destination for people looking to get away on holiday this summer."

Play adapts concepts of failed Wow Air but will take a more conservative approach developing its business. The airline will grow its fleet from three to six A321neos by 2022 and 15 by 2025. After launch of flights to Europe Play will offer connections to the US in 2022.