Helvetic completes the renewal of its Embraer fleet 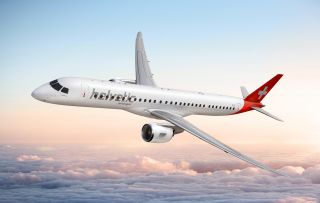 The arrival of the carrier’s fourth Embraer E195-E2 concludes a fleet renewal programme that began in October 2019.

The latest arrival, which bears the registration HB-AZL, touched down on Swiss soil August 15. The 9,900-kilometre delivery flight from Brasil over Palmas took some eleven-and-a-half hours.

The arrival of HB-AZL, almost two years since the delivery of Helvetic Airways’ first E-Jet E2, concludes the fleet renewal programme with a total investment of almost USD 750 million.

With the coronavirus pandemic bringing a more regional emphasis to air transport along with a trend towards the use of smaller aircraft types, Helvetic Airways considers itself ideally equipped both to provide reliable and cost-effective flight operations and to take advantage of the new opportunities that are currently offered in markets worldwide.

No plans for further purchases

Its new fleet additions also make Helvetic Airways one of the biggest Embraer E-Jet E2 operators in the world.

Helvetic Airways also holds purchasing rights for a further twelve Embraer E-Jet E2 aircraft. "But in view of the present pandemic and its repercussions," says CEO Tobias Pogorevc, "we do not plan to exercise these in the near future."

The Helvetic Airways workforce numbers some 450 employees. The company also has its own maintenance hangar and operation at Zurich Airport, which is further home to its corporate head office.
© aero.uk | 25/08/2021 11:46