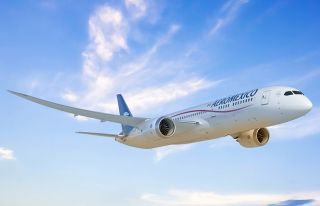 MEXICO CITY - As part of their fleet plan, Aeromexico has received new Boeing 737 MAX 9 aircraft. The first two aircraft landed in Mexico City in the early hours of May 29.

In the last decade, Aeromexico undertook a landmark transformation. Thanks to innovations in their winglets, engines, and other components, the new MAX 9 aircraft will consume up to 16% less fuel, produce 16% less CO2 per passenger versus other aircraft of similar category and have a range of more than 6,000 km.

The aircraft has a unique configuration for Aeromexico with 181 seats, 16 in Premier Class, 18 in AM Plus, and 147 in Economy Class. It is expected these models begin commercial operations in mid-June. With the arrival of these aircraft, Aeromexico plans to conclude this month with a fleet of 108 aircraft, out of them three 737 MAX 9.