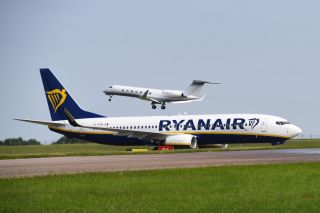 LONDON - Britain said it would extend a waiver on airport slot rules for the summer holiday season meaning airlines don't have to fly to keep their takeoff and landing windows, helping carriers hamstrung by the Covid-19 pandemic. The EU mulls restoring some slot competition over summer.

Rules governing takeoff and landing rights at once-busy airports have been suspended since last year, freeing airlines from the obligation to use 80 percent of their take-off and landing spots or else cede them, so-called "use it or lose it" rules.

The Department for Transport said in a statement that the move "provided flexibility to airlines to support them during this difficult time" and reflected the current low demand for air travel.

Covid-19 restrictions in Britain currently ban holidays and many airlines are struggling financially after close to a year with minimal revenues.

While longer-established airlines such as British Airways and Virgin Atlantic with a big airport presence will welcome the extension, low cost players like Ryanair and Wizz Air are impatient to see a return to normal rules.

Both have said that the suspension stops them from adding new flights and creating competition.

Airport Coordination Limited (ACL), an independent slot co-ordination company, said in an earlier statement that alleviation would be granted in the UK for the Northern Summer 2021, subject to slots being returned three weeks or more in advance of the planned operation. It added that newly allocated slots are excluded from the alleviation.

Britain's move to extend the waiver could see it diverge from an EU proposal made in December to restore some slot competition this year. It is the UK's first decision on airport slot rules since it left the European Union's orbit on Dec. 31.

The move also means that airlines do not need to fly "ghost flights". Before the waiver was introduced, some carriers ran empty flights to avoid losing slots, sparking outrage among environmentalists and the wider public.
© Reuters, aero.uk | Image: LHR | 01/02/2021 07:55