British Airways plans to lay off a quarter of pilots 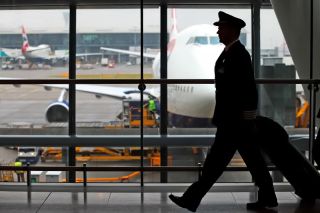 LONDON - British Airways is seeking to lay off a quarter of its pilots as it slashes costs to weather the coronavirus crisis, according to a letter sent to their union and seen by Reuters. BA intends to cut 1,130 of its 4,346 flight captain and co-pilot jobs, the IAG-owned airline's head of flight operations told the BALPA union in the letter.

Under plans revealed on Wednesday, the airline is also planning "significant" cuts to its 16,500 cabin crew in response to the pandemic, which has all but halted traffic.

"In a short space of time the situation has significantly deteriorated," BA's flight operations chief said in the April 28 letter to pilots. "There are no clear signs of improvement in air passenger demand."

BA declined to comment on the planned layoffs, which were first reported by Sky News.

Rivals Lufthansa and Air France-KLM are putting off redundancies until they finalise government bailout deals worth billions of euros. But IAG has set a different course - pursuing 12,000 job cuts and productivity gains from the remaining 30,000 employees, without seeking rescue aid.

"It is worth noting that many of British Airways' competitors in Europe and globally are receiving state aid in various forms," the flight operations executive wrote to BALPA union negotiator John Moore.

"The resulting competitive environment will create a distorted market where some of those competitors will have the option to provide overcapacity and lower fares."

That argument for job cuts left the pilots' union unmoved. "The company has declined government support, claiming it is financially secure enough to survive the coronavirus crisis, so it's hard to see how these cuts can be justified," BALPA General Secretary Brian Sutton said in a statement.

"BALPA is fighting to save every pilot job at BA," he said. IAG, which also owns Aer Lingus, Iberia and Vueling, has reaped the rewards of past cost-cutting that its main European rivals have struggled to match.

Chief Executive Willie Walsh, who postponed his retirement to steer the group through the crisis, has been a vocal opponent of state support over the years. Like many other major carriers, however, BA has used public funding to furlough tens of thousands of staff.

In a move that some union officials described as provocative, BA told pilots they should expect no more than their minimum entitlements in severance pay.

"Under the current circumstances, the cost of delivering any enhanced voluntary redundancy programme will now be prohibitively expensive," the letter said.

"Subject to consultation, we are proposing to meet minimum statutory obligations only, along with any contractual notice pay."

Besides reducing its planned fleet, BA told pilots it was pursuing "flexibility and efficiency changes" that would account for 15% of the redundancies. "Those remaining in employment are also likely to be impacted," the letter added.

In a separate message to British Airways staff this week, the airline's CEO Alex Cruz had warned there was "no government bailout standing by" and jobs would have to go.