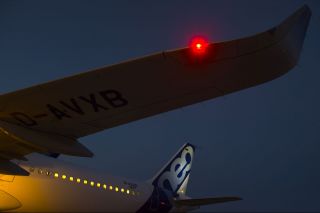 TOULOUSE - Job losses are rippling through the French aerospace supply chain, prompting sporadic strike action in the traditionally strife-free sector as unions warn of redundancy notices. In Mondouzil near Toulouse, 20 employees of precision machining company Cauquil have staged strikes over the loss of 35 out of 76 posts.

Growth in demand for planes such as the Airbus A320 fuelled the company's expansion and provided the village with more jobs than people. Now, only a quarter of staff are working with the rest on furloughs following a 70% drop in activity due to COVID-19.

"We have a lot of problems obtaining figures because we thought there would be a 20% drop in volume (due to the pandemic), but the management says it will be more like 70% which means 35 jobs going by the end of December," said CGT union official Herve Dessolin.

Managing director Didier Cauquil insists the first ever layoffs are "the only solution to save the company".

Revenues halved to 7 million euros ($8.57 million) this year: loose change for aerospace giants but typical of a network of "mom and pop" metal-machining shops feeding their global supply chains.

In the Occitanie region surrounding Toulouse, which is home to planemaker Airbus, some 700 companies and 110,000 jobs depend on aerospace.

Some of the most venerable names in French aerospace - aerostructures maker Latecoere, equipment supplier Daher and fuselage parts maker Figeac Aero - have announced a total of over 2,000 job cuts in the region.

Workers at Latecoere's cabling subsidiary Latelec staged strikes this month over the loss of 129 out of 450 jobs.

And privately held AAA, which makes parts and helps run larger assembly lines, has said 700 jobs are threatened. Akka Technologies, an engineering sub-contractor, is cutting 800 out of 2,000 staff in the Toulouse region, unions say.

"Management paints a catastrophic situation but we want them to study every possibility," said CGT union representative Franck Laborderie. Akka said it is in discussions with unions.

Airbus, however, which employs 28,000 in the region, looks set to avoid compulsory redundancies after warning they could not be ruled out as part of 15,000 job cuts from its worldwide workforce of 130,000.

"This was our red line but there will be no forced departures at Airbus," said Force Ouvriere union official Jean-François Knepper.

Airbus has cut production by an average of 40% but expects to reverse part of the reduction late next year.

It has asked its supply chain to be ready to support an 18% rise in A320-family output to 47 a month by mid-2021 from 40 now. Vertical Research Partners analyst Rob Stallard says that could slip by three months to the fourth quarter.

"I think it’s possible. The key question will then be, is it sustainable," said one supply chain executive of hopes of a partial rebound in production in the fourth quarter.

Many suppliers, weakened by previous price cuts, fear it will be the final straw for them if manufacturers misjudge the pace of recovery and have to pause or cut output again.
© Reuters, aero.uk | Image: Airbus | 31/12/2020 10:26