Gatwick aims to bring its Northern Runway into routine use 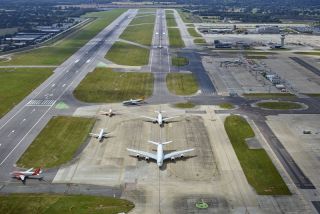 LONDON - Gatwick aims to bring its existing Northern Runway into routine use alongside its Main Runway in order to secure the airports long-term growth. The airport management has announced that a public consultation will start on the 9th September 2021.

According to the management, the scheme will help generating approximately 18,400 additional jobs by 2038 and an additional expected £1.5bn GVA to the region.

While passenger numbers currently remain low due to the COVID-19 pandemic, Gatwick is taking its plans for growth forward now as we still expect to be capacity constrained in the time it would take to secure approvals, complete construction and start operations.

The proposed plans would allow the airport’s Northern Runway to be brought into routine use, for departing aircraft, by repositioning its centre line further north by 12 metres.

This would enable dual runway operations with the airport’s Main Runway whilst meeting all international safety standards. According to the management, the plans would add resilience to Gatwick’s operations (reducing delays and congestion), bring new global connections and allow an increase in passenger capacity to approximately 75 million passengers per annum by 2038.

Other elements of the proposals include improved airport access, highway improvements, as well as additional landscape/ecological planting and environmental mitigation.

The project proposals are low impact and are in line with Government policy of making best use of existing runways. The project will be delivered in a sustainable way which helps to achieve the Government’s overall goal of net zero emissions by 2050.

As the proposed Northern Runway plans are considered a Nationally Significant Infrastructure Project, the airport plans to apply for a Development Consent Order (DCO) to build and operate the scheme.

Before the application is submitted Gatwick will be running a twelve-week public consultation, for anyone who is interested in reviewing or commenting on the proposals, from 9th September 2021 to 1st December 2021.

The Statement of Community Consultation (setting out how Gatwick proposes to consult the local community on the proposed Northern Runway project) has been published here. Full consultation materials will be made available here from the 9th September along with a virtual exhibition and an option to book a telephone surgery with project experts or to request a virtual briefing for local stakeholder groups.

Gatwick is the UK’s second largest airport and flies a range of both short and long-haul point-to-point services. In 2019, a new long-term partnership was formed with VINCI Airports which purchased a 50.01% stake in the airport.
© aero.uk | Image: Gatwick Airport | 30/08/2021 11:42