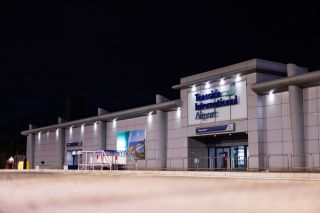 TEESSIDE - Loganair suspends its flights from Teesside to London-Heathrow and Southampton citing "cost of aviation fuel" and recent fee increases at the London hub. The Heathrow route suffered from a sluggish return of business travel while leisure traffic spearheads recovery of British aviation.

Coupled with "global oil prices affecting the cost of aviation fuel" the new charges made the London Heathrow route from Teesside "unviable" - Loganair will discontinue the service in two weeks.

"The Teesside to Southampton service will also stop as a result of the cessation of the London service as it cannot be accommodated on the remaining Loganair aircraft," the airline said.

"While slowly recovering, business flights were still nowhere near pre-pandemic levels, immediately putting the route at a disadvantage," Teesside Airport Managing Director Phil Forster said. "The aviation industry is also facing a challenging and complex time from a range of other external factors which we, as an airport, are working hard to mitigate."
© aero.uk | Image: Teesside Airport | 10/05/2022 09:43