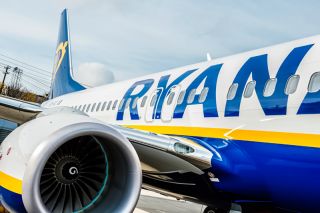 DUBLIN - Ryanair is to close its base at Frankfurt Hahn Airport, and bases at Berlin Tegel and Duesseldorf airports are likely to shut down at the end of the summer after German pilots rejected proposed pay cuts, the Irish airline said on Tuesday.

The moves, which will include an undisclosed number of pilot job cuts, come after a slight majority of German pilots voted against a proposed deal of savings that Ryanair said were required by COVID-19 disruption.

"We must move on with alternative measures to deliver savings, which regrettably will mean base closures and dismissals," Ryanair said in a memo to German pilots seen by Reuters.

The airline, Europe's largest low-cost carrier, said in the memo that 70% of its pilots across Europe had already accepted cuts to pay and conditions in the wake of the COVID-19 pandemic.

In Ireland, management bypassed the union and got pilots to accept the new conditions individually.

In Austria, Ryanair announced the closure of the Vienna base of subsidiary Lauda before doing a deal with some pilots to save it weeks later.

German union Vereinigung Cockpit, in a statement released before Ryanair announced the base closures, said it believed there was still scope to resolve the dispute.

"We are not giving up hope. The employer would be well advised to get back to the negotiating table quickly now," it said.

But it reiterated its opposition to the deal offered by Ryanair, saying the duration of the offered job security would have been until March 2021 whereas pay cuts were demanded until 2024.

Ryanair said it would stop basing planes at Frankfurt Hahn Airport from the start of November, with pilots at the base to receive letters with details of their notice period this week.

Pilots at Berlin Tegel and Duesseldorf "are likely to close" in advance of the winter season, with details to be provided next week, the statement said.

Once the closures have been completed, Ryanair will look to cut pilots based at Frankfurt, Cologne, Berlin Schoenefeld airports through a collective dismissal process. Other cost-saving measures include changing rosters and freezing promotions and base transfers, it said.
© Reuters, aero.uk | Image: Nuremberg Airport | 23/07/2020 07:49