Tim Clark to retire from Emirates 2020 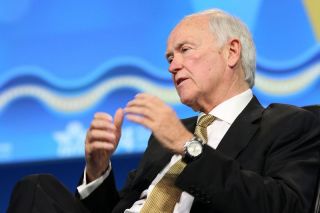 DUBAI - Tim Clark will retire as the president of Emirates Airline at the end of June 2020 after more than three decades at the state-controlled business that has helped to transform Dubai into one of the world's major travel crossroads. Sir Tim was part of the original Emirates management team in 1985.

Emirates Chairman Sheikh Ahmed bin Saeed al-Maktoum said on Tuesday in an internal memo to staff, reviewed by Reuters, that Clark would stay on as an adviser to the company.

"Through wars, economic recessions, disasters natural or manmade, and various industry upheavals, Tim has ably steered and grown Emirates to its standing today as the world's largest international airline, and an eminent player in the global airline industry," Sheikh Ahmed said in the memo.

An Emirates spokeswoman confirmed the retirement to Reuters. Clark, 70, joined the airline as a founding member in 1985, having previously worked at Gulf Air and Caledonian Airways.

The British national became Emirates' president in 2003. "Tim is a giant of the industry. He had the vision behind Emirates and has cultivated the airline to where it is today," said independent aviation consultant John Strickland.

Knighted in 2014 for his services to British prosperity and the aviation industry, Clark has since been referred to by many in the industry, including those at Emirates, as "Sir Tim".

Sheikh Ahmed, a member of Dubai's ruling family who has been the airline's chairman since inception, praised Clark as being central to Emirates success and Dubai's emergence as a global aviation hub.

"His achievements are too many to recount individually, but they will all be remembered," he said in the memo. Emirates, profitable for the past 31 years, has been crucial to putting Dubai on the map and its transformation into a global financial and tourism hub.

Launched in 1985 with aircraft leased from Pakistan International Airlines, Emirates today operates a fleet of 270 aircraft to 159 destinations, according to its website.

It carried close to 60 million passengers in its last financial year, and operates the single largest fleet of Airbus A380 superjumbo jets. The airline has in recent years faced a slowdown in growth.

In a separate email to staff this month, it said that from next year it would no longer offer discounted tickets to friends of employees, citing the impact those reduced fares have had on revenue.

Emirates' hub, Dubai International Airport, has been the world's busiest for international passengers since 2014 when it overtook London's Heathrow airport.