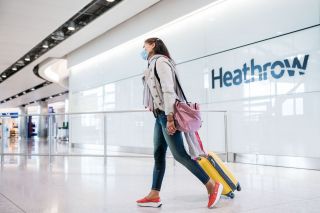 LONDON - Fines of 5,000 pounds ($6,900) will be introduced from next week for people from England who try to travel abroad without good reason under new COVID-19 laws which last until the end of June. In the UK, foreign holidays are currently banned under "Stay at Home" legislation.

This legislation will be replaced by the new COVID-19 laws next week. The government has said holidays could be allowed again from May 17 at the earliest. But new warnings from the Prime Minister about a third wave of COVID-19 infections in Europe on Monday has placed the peak holiday season in jeopardy.

Sources told the Times newspaper that the legal ban on holidays until June 30 was for "legislative convenience" and does not pre-empt the government's review on how and when to restart travel. That is due on Apr. 12.

According to Health Minister Matt Hancock, there have been no changes to England's timings for resuming international travel, despite the new legislation. "The earliest date by which we will allow for international travel...is the 17th May. That has not changed," Hancock told Sky News.

Furthermore, he said, there are no plans for travellers from Europe to be added to Britain's travel "red-list" with mandatory quarantine in hotels on arrival, health minister Matt Hancock said on Tuesday, in the face of rising infections on the continent.

"We don't know... we've got to protect this country and the progress that we've made, but at the same time I totally understand that lots of people want to travel abroad this summer."