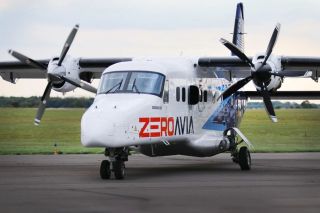 KEMBLE - Zero-emission flight took a giant step forward with ZeroAvia flying the largest aircraft yet to be powered by a hydrogen-electric engine. The 19-seat Dorniert 228 testbed took to the skies for the maiden flight retrofitted with a full-size prototype hydrogen-electric powertrain on the left wing of the aircraft.

The twin-engine aircraft was retrofitted to incorporate ZeroAvia’s hydrogen-electric engine on its left wing, which then operated alongside a single Honeywell TPE-331 stock engine on the right.

, © ZeroAvia
All systems performed as expected, according to the company. ZeroAvia expects to submit certification in 2023, with this programme also serving as key to unlocking speedy technology development for larger aircraft.

ZeroAvia’s 2-5 MW powertrain programme, already underway, is meant to scale the clean engine technology for up to 90-seat aircraft, with further expansion into narrowbody aircraft demonstrators over the next decade.

ZeroAvia will now work towards its certifiable configuration in order to deliver commercial routes using the technology by 2025. The Dornier 228 will conduct a series of test flights from Kemble and later demonstration flights from other airports. Almost exactly two years ago, ZeroAvia conducted the first of more than 30 flights of a six-seat Piper Malibu aircraft using a 250kW hydrogen-electric powertrain.
© aero.uk | Image: ZeroAvia | 20/01/2023 09:57