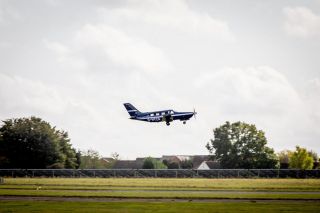 ZeroAvia will supplement on-site electrolysis hydrogen production with supply from Octopus Hydrogen in order to power its HyFlyer II project – a UK Government-backed programme to develop a certifiable 600kW hydrogen-electric fuel cell powertrain which will power a 19-seat aircraft with 500 nautical mile range.

Aviation is a key future use case for green hydrogen – as recognised in the UK Government’s Hydrogen Strategy. ZeroAvia and partners in HyFlyer projects have already developed the Hydrogen Airport Refueling Ecosystem (HARE) – inclusive of an on-site electrolyser.

This system was used to power the breakthrough flight testing programme of a six-seat Piper Malibu aircraft as part of HyFlyer I and is in continued use as part of HyFlyer II. The company identified that for the larger programme, an additional ready supply of green hydrogen was necessary to supplement on-site production.

Octopus Hydrogen is a new company within the Octopus Energy Group, bringing to market a locally distributed ‘green hydrogen as a service’ proposition for heavy goods transportation, energy storage, industrial applications and aviation to accelerate those sectors’ transition to a clean and zero-carbon future.
© aero.uk | Image: ZeroAvia | 26/08/2021 15:53