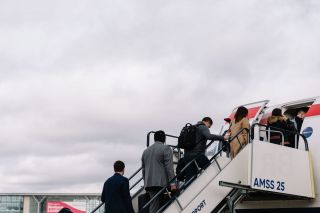 LONDON - 2021 UK air traffic averaged just 41 percent of pre-pandemic figures, mirroring 2020’s 40 percent average. This is despite shoots of optimism as routes to the USA re-opened and vaccinated passengers were permitted to travel overseas, although destinations were subject to frequent change.

"This often left little time for the industry to respond and as a critical part of the industry infrastructure," British air navigation service provider NATS said. "NATS had to remain prepared for traffic levels that frequently didn’t materialise."

"October was the busiest month overall in 2021, with 139,716 flights (61 percent of 2019), as travel restrictions were eased before the Omicron variant resulted in further constraints," NATS said.

Several airports also saw their busiest day of the year in December: Heathrow on 19 December with 950 flights, Luton (385 flights) and Stansted (474 flights) on 17 December.

Overall, the UK recovery has lagged behind Europe, largely due to Government restrictions and European restrictions on UK travel. European Network traffic in 2021 was 56 percent of 2019 levels compared to the UK’s 41percent.

"Traffic has unfortunately decreased again in the New Year," NATS operations director Juliet Kennedy said. "With forecasts not predicting a full recovery for a number of years, we’ve still got a long way to go before the industry is back on its feet."
© aero.uk | Image: NATS | 14/02/2022 14:16