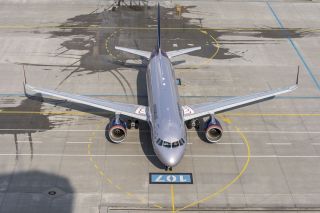 LONDON - New UK sanctions on Russia target aviation and oligarchs. Airspace violations by jets that fall under sanctions will be considered a criminal offense under a legal amendment. Authorities already seized a private jet at Farnborough Airport last week and investigate eventual ties to a Russian oligarch.

The UK was among the first countries to close its skies upon the Russian invasion of Ukraine. State-owned Aeroflot had its foreign carrier permit supended within hours. "This means that Aeroflot will not be permitted to operate flights to or from the United Kingdom until further notice", the CAA said.

Now, the Government is looking beyond Aeroflot on sanctions. Last Thursday, authorities detained a private jet at Farnborough Airport - a first under and extended regime of sanctions to hit Russian billionaire oligarchs.

Foreign Secretary Liz Truss had announced the new suite of aviation sanctions giving the UK Government new powers to detain any Russian aircraft in the UK.

"We have also strengthened the current overflight and landing ban on Russian aircraft, laying new legislation today to make it a criminal offence for any Russian aircraft to fly or land in the UK," the Government said.

"Banning Russian flagged planes from the UK and making it a criminal offence to fly them will inflict more economic pain on Russia and those close to the Kremlin. The new powers will also allow the Government to remove aircraft belonging to designated Russian individuals and entities from the UK aircraft register.

Additional trade measures will prevent UK exports of aviation or space-related items and technology to Russia, including related services such as insurance and reinsurance services. This means cover is withdrawn on existing policies and UK insurers and reinsurers will be unable to pay claims in respect of existing policies in these sectors.
© aero.uk | Image: Airbus | 14/03/2022 11:25