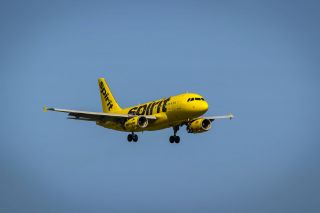 MOBILE - U.S. budget carrier Spirit Airlines on Wednesday unveiled a provisional deal to order 100 Airbus A320neo-family jets to be delivered through 2027, becoming the first U.S. airline to pick European planes since Washington imposed tariffs on them.

It is the first tentative win for Airbus in the United States since Washington imposed 10% tariffs on some of the planes it offers to U.S. carriers last week, part of a long-running transatlantic trade dispute over aircraft subsidies. "It proves tariffs don't work," a European source said.

U.S. rival Boeing, which has accused Airbus of needlessly provoking the tariffs by ignoring World Trade Organization rulings, could not immediately be reached for comment.

The new order, involving a mix of Airbus upgraded A319neo, A320neo and A321neo models, will be used to support Spirit's growth across the U.S, Latin America and the Caribbean, Chief Executive Ted Christie said in a statement.

The deal follows months of negotiations which went past a September target date for a decision. To enter Airbus's official order backlog, it must be followed up with a final contract.

Depending on the number of each variant of the A320 single-aisle family chosen, the deal could be worth $11-12 billion at the most recent 2018 Airbus list prices, but industry sources say such deals typically involve discounts of at least 50%.

Spirit CEO Christie told analysts in August the airline saw benefits in continuing to operate a single fleet but that it would closely study the prices being offered. Spirit currently operates an all-Airbus fleet of 140 jets.

Founded in 1993, the ultra-low cost carrier relies on "unbundling" fares, offering a basic service at an attractive cost, topped up by a raft of optional extra charges.

It was not immediately clear whether an order from Spirit would include any deal to offset the cost of any tariffs.

Aircraft are typically ordered several years in advance, meaning any planes ordered now would only be covered by tariffs in the event of an extended transatlantic tariff war. Airbus jets assembled at a plant in Alabama are not currently included.

Spirit already has seven Airbus A320neo aircraft scheduled for delivery from Mobile, Alabama, by the end of this year. Boeing has said the tariffs are needed to level what it regards as an unfair advantage for Airbus due to subsidies. Airbus has called for negotiations to end the dispute.

Both sides have partially lost WTO rulings and the European Union is expected to respond with its own tariffs next year.
© Reuters, aero.uk | Image: Airbus | 24/10/2019 08:35