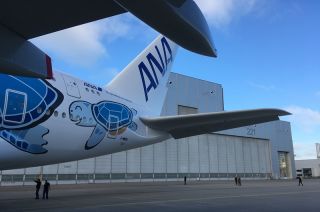 All Nippon Airways Airbus A380, © aero.de

ANA's international cargo revenue fell by 20.4% and its domestic cargo revenue by 9.9% in the first half because of the trade war and a slowdown in the global economy.

The International Air Transport Association this month reported air cargo volumes globally had shrunk for the 10th consecutive month in August, the longest period since the global financial crisis in 2008.

In the passenger market, ANA said that revenue increased year on year as it expanded in Hawaii and Europe, but that international business travel demand had slowed.

ANA said those trends looked set to continue in the second half of the year, along with intensifying competition in the low-cost carrier sector.

The airline also reported a decline in revenue from its budget carrier operations in the first half as it merged Vanilla Air with Peach Aviation.
© Reuters, aero.uk | 29/10/2019 09:01