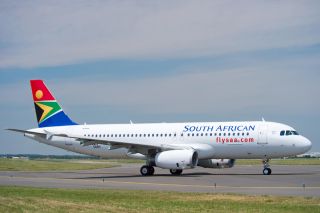 JOHANNESBURG - Workers at South African Airways (SAA) downed tools on Friday in a strike over wages and job cuts that has forced the troubled state-owned carrier to cancel all flights and left its future hanging in the balance.

SAA, which has not turned a profit since 2011 and is without a permanent CEO, says the strike by unions representing around 3,000 of its 5,000-strong workforce will cost it 50 million rand ($3.36 million) per day and threatens its survival.

The unions rejected SAA's wage offer late on Thursday, and are also striking over the carrier's plans to cut more than 900 jobs in a bid to stem financial losses and become viable without the state bailouts it has relied on so far.

SAA's acting chief financial officer, Deon Fredericks, told the eNCA news channel that the airline, hurt by past mismanagement, could not just close its eyes and carry on. "We'll just go deeper down," he said.

SAA is trying to negotiate much-needed funding from banks, Fredericks told radio station 702, but added the strike would hurt the talks as it would have a negative impact on cash flow. "If we don't get that funding we will not be able to continue."

The National Union of Metal Workers of South Africa (NUMSA) and the South African Cabin Crew Association (SACCA) called the SAA strike from 0200 GMT on Friday. NUMSA has said it will continue until the unions' demands, including for an 8% wage increase and job security, are met.

The action is not an attempt to hurt the airline but force the government to intervene so its board and management make the right decisions, SACCA President Zazi Nsibanyoni-Mugambi said.

"In our eyes this is an attempt to save (SAA) from its current management and board," she told 702 on Friday.

Two other unions at SAA representing about 2,500 employees mostly in technical and mid-management jobs said they would go to the labour court to block the airline's plan to cut jobs.

SAA, which cancelled all flights on Saturday, is among a number of state-run firms that are battling tough financial conditions after years of poor governance and so-called 'state capture' - widespread corruption involving billions of rands worth of state contracts during Jacob Zuma's presidency.
© Reuters, aero.uk | 15/11/2019 08:04