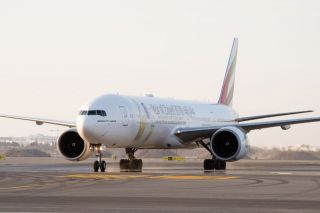 DUBAI - Emirates unveiled an $8.8 billion order for 30 Boeing 787-9 Dreamliners after intense last-minute talks at the Dubai Airshow on Wednesday, paving the way for a reduction in Emirates orders for the delayed 777X airliner from 150 to 126 777-9 and 777-8 aircraft.

Emirates tentatively ordered 40 Dreamliners in 2017, but "tough" talks to finalise the order this week had hinged on negotiations over the fate of a massive separate order for 150 777X jets after the latter ran into a year of delays.

The airline has been looking at reducing part of its 777X order, which president Tim Clark on Tuesday said could be influenced by the delays and determine the shape of a final 787 deal.

Emirates says it no longer knows when it will receive its first 777X, which was supposed to be delivered next year. Boeing has said the 777X will be delivered in 2021.

Easing an eight-month crisis over the grounding of its smaller 737 MAX, Boeing had already won tentative or firm orders for 60 of the grounded MAX jets at this week's Dubai show.

But industry sources had warned that Boeing risked leaving Dubai without resolving the critical set of interlocking deals with Emirates, the industry's largest customer for wide-body jets and the backbone for the 777X programme.

Wednesday's announcement is also effectively a message of support from Dubai for the troubled U.S. planemaker after the harm done to sister carrier flydubai by the continuing 737 MAX crisis, analysts said.

The United Arab Emirates, which includes Dubai, is a close ally of the United States, which has poured support into the region amid tensions between Iran and Gulf Arab states that provided a tense backdrop to the Middle East industry event.
© Reuters, aero.uk | Image: Emirates | 20/11/2019 12:21