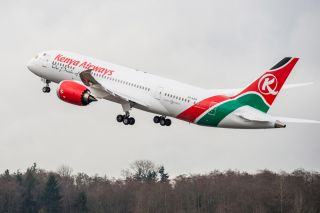 Lawmakers voted in July to re-nationalise the loss-making airline, which is 48.9% state-owned, 7.8% held by Air France-KLM , and 38% owned by local lenders, hoping to emulate the success of state-owned Ethiopian Airlines, sub-Saharan Africa's biggest airline.

Kenya Airways was privatised more than 20 years ago but sank into debt and losses in 2014 after a failed expansion drive and a slump in travellers after a major terror attack. In August, it saw its first-half pretax loss more than double from a year earlier to 8.56 billion Kenyan shillings ($83 million).

Chief Executive Sebastian Mikosz said the government will likely appoint a nationalisation advisor by the end of the year and the process should be completed next year.

"It's so important...to have the nationalisation done speedily, to have an answer about what the future of the airline is in terms of its structure in the next five years," he told Reuters in an interview. Countries like Tanzania and Rwanda are investing heavily in their national carriers, threatening Kenya Airways' market share.

Kenya Airways flies to 51 destinations globally, 43 of which are in Africa, according to the airline's website.

Ethiopian Airlines runs air transport assets, including airports and fuelling operations, under a single company. Funds from the profitable parts support the others. "This model was created 15 years ago, and it took them 15 years to get from literally a very small local airline to the giant that they are today," Mikosz said, who in May announced that he would leave Kenya Airways by the end of the year.

Kenya Airways is also expecting an equity injection from the government to help improve cash flow, Mikosz said. He disputed analysts' view that a government takeover would not return the airline to profitability.

Being privately owned did not help the airline avoid its financial woes and if state ownership works for the competition, "why not for Kenya Airways?" he said.

But the airline must retain its commercial flexibility and avoid some of the limitations imposed on other state-owned companies, such as regulations requiring public tendering. The airline needed to source spare parts quickly from unique suppliers. A Boeing plane needs Boeing spare parts, Mikosz said.

Kenya Airways also needs to exploit the lack of connectivity on the continent and a growing Asian market to win back market share from competitors like Emirates and Turkish Airlines , he said. "Just the Chinese market is going to add in the next 15 years more than a billion passengers ... it is ten times the size of Africa," he said.
© Reuters, aero.uk | Image: Boeing | 30/11/2019 09:33