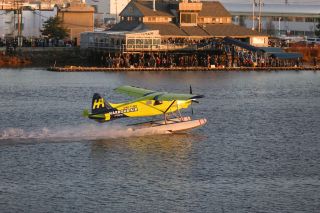 VANCOUVER - The pioneers behind the world's first fully electric, commercial flight say they have made history, but climate-change activists see electric air travel as a dream yet to come true. The Harbour Air seaplane - which seats six - took off close to Vancouver in Canada on Tuesday and flew for less than 15 minutes.

Its pilot, Greg McDougall, declared the mission a success, saying in a statement: "We made history."

It was the first time an all-electric commercial plane had taken to the skies, unleashing hopes that fuel-guzzling jets - a key cause of global warming - could be replaced by a green alternative.

Climate-change activists welcomed the maiden flight but played down hopes that electric planes carrying mass tourists, commuters or business travellers would take off any time soon.

"We’re still a long way from having a commercial service," said Lucy Gilliam, aviation and shipping campaigner at Transport & Environment, a European umbrella group of NGOs campaigning for cleaner transportation. "This is a milestone, but we need to be realistic that electrification will play a role in short-haul flights, but not in the long-haul," she told the Thomson Reuters Foundation by phone from Brussels.

The record test flight - albeit short - came as eco-friendly travellers try to reduce their carbon footprint and use "flight shaming" to persuade others to follow suit.

Harbour Air ePlane, © YSL
Teenaged climate activist Greta Thunberg - named on Wednesday as Time magazine's person of the year - took the lead in August when she used a racing yacht to get to the United Nations Climate Action Summit in New York.

"This is paving the way for private jets to be electrified," said Leo Murray of Britain's Possible charity, which campaigns for climate action. But he said long-distance journeys in large airplanes "make up the bulk of the climate damage from air travel". Others agreed there was lots more work to be done.

"If we are considering electrification of aircraft as a potential solution to aviation’s impact on climate change, then this is only the start," Nikhil Sachdeva, from consulting firm Roland Berger, told the Thomson Reuters Foundation.

The lithium battery used in the Canadian flight could only power a seaplane for about 160 km, almost the distance by plane from Brussels to Luxembourg. Harbour Air plans to start electrifying its fleet of more than 40 seaplanes by 2022, once certification and regulation processes are completed.

"We don’t have perfect science and perfect data on exactly how (the electric aircrafts) will perform. So the regulators need time to gather that data and to learn from the technologies before they can say this is safe", said Sachdeva.
© Thomson Reuters Foundation, aero.uk | Image: Harbour Air | 15/12/2019 08:57