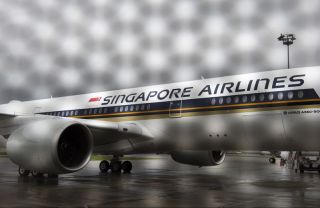 SINGAPORE - Singapore Airlines will cut capacity by 96%, ground almost its entire fleet and impose cost cuts affecting about 10,000 staff because of coronavirus travel curbs it described as the "greatest challenge" it ever faced.

The global aviation industry is struggling to absorb shocks from the pandemic, with airlines across the world grounding fleets, placing thousands of workers on unpaid leave and seeking state bailouts to survive the crisis..

The measures by SIA, majority owned by state investor Temasek, follow Singapore's decision to close its borders to stem spread of the virus.

"This will result in the grounding of around 138 SIA and SilkAir aircraft, out of a total fleet of 147, amid the greatest challenge the SIA Group has faced," SIA said.

Shares in the airline slumped 11% in a broader market down 7.3% to close at their lowest in 22 years.

SIA said it has drawn on its credit lines in the past few days to meet immediate cash flow requirements and is in talks with several financial institutions over future funding needs.

"It's important to have access to liquidity, to pay leases, to pay employees and to be able to continue to function. This is a positive, but the cost of funding remains uncertain," said K. Ajith, an analyst at UOB Kay Hian.

In a memo to staff, SIA Chief Executive Goh Choon Phong said the airline had agreed with unions on cost-cutting measures, including voluntary unpaid leave for staff up to divisional vice presidents and varying days of compulsory unpaid leave for pilots, executives and associates.

These measures will affect about 10,000 staff, the memo said. SIA had more than 26,500 employees in its last financial year.

In a report issued on Monday before the announcement, UOB Kay Hian said SIA needed "backstop liquidity" of at least S$5 billion ($3.43 billion) by June.

It faces S$2.5 billion of marked-to-market losses by the end of March from having taken out fuel hedges at high prices, the broker said.

Banking sources and analysts said potential funding options include bank loans or tapping Temasek. The state investor declined to comment and SIA would not comment specifically on funding plans.

"It is unclear when the SIA Group can begin to resume normal services, given the uncertainty as to when the stringent border controls will be lifted," the airline said.