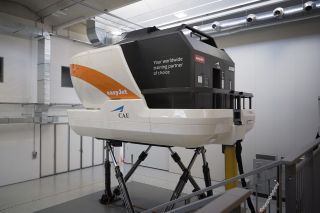 LONDON - Mark, 34, quit his job as a town planner in London last year to start flight-training school, buoyed by a conditional offer of employment with budget carrier Easyjet at a time when the airline industry was desperately short of pilots. The coronavirus pandemic has changed all that.

Carriers are furloughing pilots by the thousands and airlines including Easyjet, Delta Air Lines and Lufthansa forecasting they will be smaller for years until demand fully returns.

"It is like almost an entire career pulled from under your feet," said Mark, who declined to provide his last name due to concerns about his future prospects.

He had expected to complete his 109,000 pound ($136,000), 18-month training programme in December but now faces uncertainty over the timing due to lockdowns.

He remains in the dark about whether Easyjet will still need new pilots when he completes his training or if he will be forced to look at other airlines or return to his old career.

An Easyjet spokeswoman said the airline had instigated a recruitment freeze due to the pandemic impact which reduced the need for new pilots. "We are continuing to review our pipeline of those cadet pilots set to join Easyjet in the coming months and as soon as the situation changes we plan to prioritise roles for them," she said.

The crisis marks a sharp reversal from recent years when some airlines had been paying sign-on bonuses of $25,000 to $30,000 to lure pilots, said Andre Allard, president of Montreal-based aviation sector recruitment agency AeroPersonnel. "We used to run after the candidates," he said. "Now they are running after us."

Two years ago, some regional airlines grounded planes for lack of pilots and carriers such as Emirates and Australia's Qantas Airways struggled to fully utilise their jets because of training bottlenecks.

Now Qantas has shelved plans to open a second pilot training school due to the coronavirus, which has led it to ground the bulk of its fleet and place staff on unpaid leave. Major U.S. airlines have frozen pilot hiring. The previous boom in pilot training could turn into a bust for schools that invested to accommodate more students.

Thierry Dugrippe, head of Canadian pilot training school Air Richelieu, said he expects a decline in enrolment of 30% to 40%. He said students about to complete the 20-month commercial line pilot training program, which costs C$85,000 ($61,000), are looking at what to do next. "They are asking a lot of questions," Dugrippe said.

Training provider CAE said two cadet programmes at its Phoenix flight school were suspended at the request of unnamed sponsor airlines due to coronavirus-related travel restrictions.

In Seoul, a pilot in his 20s who had been hired as a trainee at budget carrier Eastar Jet had his contract cancelled on April 1, alongside around 80 colleagues.

The pilot, who declined to be named because he was concerned about getting a job in the future, paid 150 million won ($124,000) to gain his license at a U.S. flying school, lured by the global pilot shortage.

"A lot of people quit their jobs and headed to aviation schools abroad to get pilot licenses, because carriers were actively recruiting pilots at that time," he said. Eastar said it cancelled the contracts of around 80 trainees due to deteriorating financial conditions.

Mark, the Easyjet trainee, said one of his hopes was that some pilots would take early retirement due to the downturn, leaving openings for new hires when demand returns.

In the United States, up to 5,000 pilots a year could retire in the next few years, according to Kit Darby, an aviation consultant and former pilot. U.S. pilot hiring could begin again in two to three years due to those retirements, he said, but that makes it a tough market for pilots finishing their training earlier.

Danny Lynch, 36, who had previously worked in digital marketing, finishes a 99,000 pound, 18-month flight training course in Oxford in mid-2021 and is banking on a quicker recovery. "I certainly hope that by then, the market has improved," he said.

Those due to finish training earlier, like Lauren, a trainee in her 30s at a British flight school, are busy coming up with contingency plans.

Lauren, who declined to provide her last name, does not yet know when she will complete her course which was paused during lockdowns, nor whether airlines will be hiring at the end of it.

For her, options if a commercial pilot job is not immediately available could include returning to her old corporate career and flying small planes as a hobby on the side.
© Reuters, aero.uk | Image: CAE | 06/05/2020 12:09