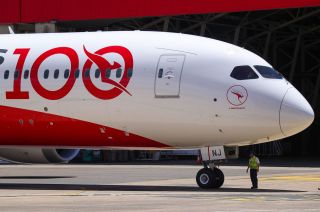 SYDNEY - Qantas Airways Ltd is axing at least 20% of its workforce and intends to raise up to A$1.9 billion ($1.3 billion) of equity under a sweeping cost-saving plan prompted by the coronavirus pandemic. The Australian airline also said on Thursday it will ground 100 aircraft for up to 12 months.

In addition, Qantas will retire its remaining Boeing 747 fleet immediately, six months ahead of schedule, given travel restrictions imposed by the global health crisis.

"We have to position ourselves for several years when revenue will be much lower," Qantas Chief Executive Alan Joyce said of the three-year plan. "And this means becoming a much smaller airline in the short term."

Along with other airlines around the world, Qantas is battling against a huge drop in demand after countries including Australia closed their borders to try contain the pandemic.

Australian officials have said the country is likely to remain closed to the vast majority of international travellers until next year.

Joyce said Qantas was taking a "realistic" view that there would not be international operations of real scale until July 2021, with a proposed "travel bubble" between Australia and New Zealand a potential exception.

The cost-saving plan, which along with reduced fuel expenses is expected to save around A$15 billion, marks Qantas' first equity raising in just over a decade. It also coincides with what was supposed to be a celebratory 100-year anniversary for the airline.

The capital raising, at a discount of 13% to the airline's last trading price, includes an underwritten A$1.36 billion institutional placement and a A$500 million share purchase plan.

"We view Qantas' adherence to its financial framework as highly supportive of its rating, as it ensures its capital structure remains robust and liquidity remains strong," Moody's vice president Ian Chitterer said. Qantas is one of only a handful of airlines with an investment grade rating.

The 6,000 job cuts will come from across the airline's 29,000-strong workforce. Around half will be non-operational and ground operations staff, with the remainder a mix of cabin crew, engineers and pilots.

A further 15,000 workers will remained furloughed until Qantas begins operating more flights. It has begun ramping up domestic flying as state borders reopen and expects to reach 40% of normal capacity in July, an average of around 70% next financial year and 100% in FY22.

With international operations on hold, Qantas will take an impairment charge of up to A$1.4 billion, mostly due to its fleet of 12 Airbus A380s, which Joyce said were not expected to fly again for at least three years and would be sent to the Mojave Desert for storage. The carrier will initially use its smaller A330s and 787s when international operations resume, he said.

Joyce, who has led Qantas since 2008, has agreed to remain chief executive until at least June 2023.

"The last thing I wanted to do is leave when we are in the biggest crisis in our history," said Joyce, who oversaw a grounding of the airline's entire fleet in 2011 over a pay dispute and led a subsequent cost-cutting turnaround plan.
© Reuters, aero.uk | Image: Qantas | 25/06/2020 07:34