FAA chief Dickson to put Boeing 737 MAX to the test 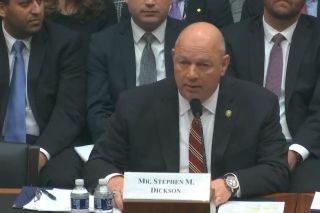 SEATTLE - Federal Aviation Administration (FAA) Chief Steve Dickson is due to conduct a two-hour evaluation flight at the controls of a Boeing 737 MAX on September 30.

This is considered a key milestone for the jet to win approval to resume flying after two fatal crashes.

Dickson, a former military and commercial pilot, and other FAA and Boeing pilots are due to take off around 9 a.m. PDT (1600 GMT) from King County International Airport - also known as Boeing Field - in the Seattle area and land around 11 a.m. (1800 GMT).

For Boeing, the flight is another milestone in the U.S. planemaker's long-delayed quest to persuade the FAA to lift a March 2019 grounding order triggered by 737 MAX crashes in Ethiopia and Indonesia within five months that killed 346 people.

The accidents plunged Boeing into its worst-ever crisis, strained its relationship with the FAA, threw into question the U.S. regulator's position as the standard-bearer for global aviation safety and prompted bipartisan calls in Congress to overhaul how the FAA certifies new airplanes.

Dickson has repeatedly said he would not sign off until he flew it himself and was "satisfied that I would put my own family on it without a second thought."

Dickson will test a number of Boeing design and operations upgrades intended to prevent similar disasters. In both crashes, a flawed control system known as MCAS, triggered by faulty data from a single airflow sensor, repeatedly and forcefully pushed down the jet's nose as pilots struggled to intervene.

If Dickson's flight and broader reviews go well, the FAA is seen as likely to lift its U.S. grounding order in late November, industry sources say, putting the MAX on a path to resume commercial service potentially before year-end.