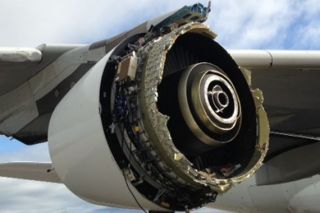 PARIS - French investigators have called for a review of the design and maintenance of titanium alloy engine parts to ensure they guard against the risks of metal fatigue following an engine blowout on an Airbus A380 exactly three years ago.

France's BEA agency made the recommendation in a final report into the accident in which an Air France jet carrying more than 500 passengers lost the front section of one of its four engines while flying over Greenland, before landing safely in Canada.

The move follows a perilous investigation involving a 21-month international aerial and ground search across the ice sheet to find a crucial titanium alloy fragment, buried 3 metres below the surface and just a metre away from a hidden crevasse.

The probe focused on the fan hub at the centre of a 3-metre-wide fan at the front of the engine made by Engine Alliance, co-owned by General Electric and Pratt & Whitney.

The BEA said a recovered fragment had shown tiny fatigue cracks in a titanium alloy called Ti-6-4 and urged regulators - the Federal Aviation Administration and European Union Aviation Safety Agency - to carry out a review of design, manufacturing, maintenance and certification processes.

"Neither the manufacturer nor the certification authorities had anticipated this phenomenon in this alloy during the design of the engine," the BEA said.

Such recommendations by leading investigators do not have to be followed automatically but typically carry some weight.

Engine Alliance said it had already taken steps to address the findings. Airbus said no flaws had been found during inspections of other engines from the same supplier, one of two A380 engine manufacturers alongside Rolls-Royce.

A spokeswoman for Rolls said it was confident the issues associated with the Engine Alliance part "cannot be attributed to any Rolls-Royce engine fan discs currently in service".

Titanium alloy is used widely in aerospace, the metal's biggest customer due to its strength compared to the weight of each part, and its ability to handle high temperatures.

The industry has faced concerns in the past about titanium alloy manufacturing processes following an engine failure.

In 1989, a severe engine blowout on a United Airlines DC-10 led to the death of 111 people during an attempted landing at Sioux City, Iowa.

That crash sped improvements in manufacturing methods for titanium alloy. But some engine experts have rejected any suggestion that there is an industry-wide manufacturing issue.

During the operation in Greenland to find the missing A380 engine fragment, French, Danish and U.S. specialists battled problems from faulty generators to storms, buried tents and concerns about polar bears, according to an expedition report.

At one point, the team resorted to low-tech methods including bamboo sticks and concentrated juice to mark the snow after their high-precision positioning system failed, but the investigation also spurred development of new sensor equipment.
© Reuters, aero.uk | 01/10/2020 07:50