"The pandemic is a glitch" 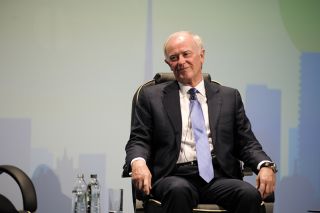 PARIS - Emirates boss Tim Clark expects a dynamic recovery in air travel demand to begin "sooner rather than later", he told an online forum on Wednesday, describing the industry's coronavirus crisis as a glitch from which the Gulf carrier can fully recover.

Speaking at CAPA Live, the veteran airline leader dismissed predictions of a prolonged slump that punishes network carriers and transit hubs such as Emirates' Dubai base.

"I'm not one of these people who believes in the new normal," Clark said. "I believe demand will return in a very robust manner."

"The pandemic is a glitch" that will keep passenger numbers down through the next six to nine months. Clark said of the aviation industry's worst crisis. "We've had many of those in the past - perhaps not as severe as this one for our industry - but nevertheless it's a glitch and we'll come through it."

Emirates is closely watched for its deep order book for larger aircraft - whose values were already depressed going into the COVID-19 crisis. Analysts also predict that demand for wide-body or twin-aisle jets will be worst affected by the slump.

"The (biggest) area for growth is in longer-haul narrow-bodies," said Parker, adding that he saw enormous pent-up demand for international travel.

Clark nonetheless expects the crisis to "get worse before it gets better", with demand remaining depressed for another six to nine months. Meanwhile, Emirates was benefiting from high global cargo rates, he said, as many passenger jets that normally carry some freight remain grounded.

Cargo services to 70 to 80 destinations are "significantly reducing cash depletion", especially when they are augmented by some passenger business, he said.
© Reuters, aero.uk | Image: Emirates | 15/10/2020 07:43