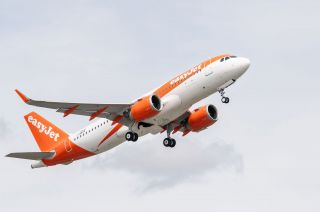 LONDON - EasyJet's bookings jumped by 50% on the day there was positive news about a coronavirus vaccine, a brief respite during a pandemic which pushed the British airline to a 1.27 billion pound annual loss, the first in its history.

European travel has been at very low levels for over eight months and easyJet's loss for the 12 months to the end of September showed the extent of the pandemic's impact on the airline -- the first annual loss in its 25 year history.

But chief executive Johan Lundgren said that underlying demand for travel was strong. "We know that down the line people want to travel. Just by the news of the vaccine, you know, last Monday bookings were up close to 50%," he told BBC Radio on Tuesday.

The pandemic has crushed easyJet's finances, forcing it to take on more debt, tap shareholders for money and sell dozens of its aircraft, but Lundgren reassured investors on Tuesday.

"No, we think we're in a good position...at this moment in time," Lundgren said when asked if easyJet would need to raise more money. "But we also said that we're going to continue to review all the options that are out there to make sure that we can cope with the circumstances and you know there's still a lot of uncertainty about when the recovery is going to take place."

EasyJet has repeatedly said it is keeping its liquidity position under review as the outlook for travel has worsened. It said that after talks with the Bank of England and the UK government's finance ministry, it will extend its borrowing under a COVID Corporate Finance Facility, staggering repayments and relieving pressure on its balance sheet.

With lockdowns in England, France and Germany, easyJet is currently flying around 20% of planned capacity and said short-term uncertainty was such that it could not provide any financial guidance.
© Reuters, aero.uk | Image: Easyjet | 17/11/2020 09:13