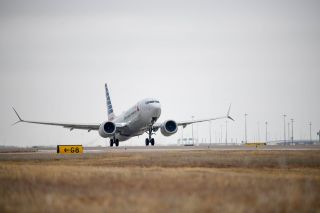 SEATTLE - Boeing delivered about 60 percent fewer aircraft to customers in 2020 than 2019 and less than one-third the deliveries of rival Airbus, the lowest in 43 years, company data showed on Tuesday. Jet deliveries are closely scutinized by investors as they generate much needed cash during the crisis.

Tuesday’s snapshot of orders and deliveries caps a year in which the coronavirus pandemic and the tail-end of a 20-month 737 MAX grounding after fatal crashes prevented embattled airlines from adding new jets to their sidelined fleets.

Also, for a second month, Boeing handed over zero 787 Dreamliners to customers, as intensive inspections over recent production flaws compounded delays from the COVID-19 crisis.

Overall, the U.S. planemaker delivered 39 planes to customers in December, including 27 737 MAX jets, one P-8 maritime patrol aircraft, and 11 widebodies.

By comparison, Airbus posted stronger-than-expected deliveries of 566 jets in 2020, remaining the world’s largest planemaker, a title Boeing held from 2012 through 2018.

Even so, deliveries at Airbus fell 34% from a record a year earlier, when travel demand was riding high on the increasing mobility of consumers in fast-growing markets across Asia.

For jet orders, Boeing booked 90 orders in December, including a previously announced lifeline deal from budget airline Ryanair for 75 737 MAX jets. The best-selling narrowbody was cleared to resume service in November in the U.S. after a 20-month grounding order.

But the fresh orders were eclipsed last month as buyers walked away from orders for 105 MAX jets and two 787s, Boeing said.

Adjusted for stricter accounting standards, cancellations and orders where the buyer converted to another model, 2020 net orders for all Boeing models moved to negative 1,026 at year-end, from negative 1,048 in November.

For the MAX, buyers canceled orders for some 641 jets, while Boeing removed from its backlog another 523 seen as unlikely to be filled when stricter accounting standards are applied.
© Reuters, aero.uk | Image: American Airlines | 13/01/2021 07:44