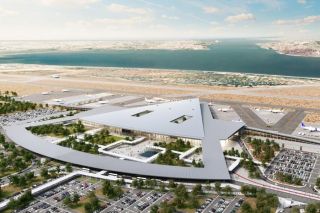 LISBON - Portugal's aviation regulator this week refused to evaluate a plan to build a new airport in Lisbon, in the latest setback for one of the country's largest infrastructure projects, but the government said it would push for a solution to keep the airport project alive.

The country's tourism industry, where growth was brought to a halt last year by the Covid-19 pandemic, has complained for years about a lack of capacity at Lisbon's Portela airport. A new airport at Montijo on the southern bank of the Tagus River was proposed as a second hub.

Plans for the new airport have been under consideration for five decades and the government said in 2019 the Montijo airport, where there is already a military air base, would be completed next year.

But the regulator ANAC said it had rejected the evaluation request submitted by airport authority ANA as not all municipalities in and around the new airport were happy with the plans, with some citing environmental concerns.

"It was concluded that ANAC was obliged to reject the request outright," it said in a statement on its website, explaining that according to Portuguese law, it could only evaluate the project if all local governments had provided positive feedback.

Reacting to ANAC's decision, the government said it would propose a review of the law in question. It also said it would suggest different solutions for the impasse, including building the airport elsewhere.

An environmental study in 2019 highlighted a threat to wildlife from the new airport as the Tagus estuary is a nature reserve for various birds.

French construction group Vinci, which owns ANA, the Lisbon airport operator, said in 2019 it would invest 1.15 billion euros ($1.39 billion) in the expansion of Lisbon's main airport and the construction of the new one.

ANA said it still believed the new airport in Montijo was the best option to "respond to the country's interests". "This is another stage in the process of expanding Lisbon airport capacity, which will continue and is fundamental for the economic development and recovery of the tourism sector", it added.