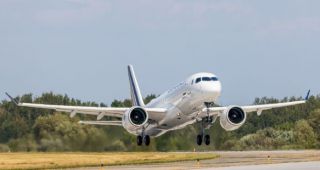 , © Air France
MIRABEL - On Thursday 26 August, the Airbus A220, sporting the Air France colours, made its production flight.

This test flight, known as a production flight, is the final part of the assembly phase and represents a major milestone before the Airbus A220 delivery process. The aircraft took off from its production site located at Mirabel airport (Canada) yesterday, returning to land a few hours later with Airbus representatives present on board to carry out various tests during the flight.

The production flight is carried out to ensure the aircraft’s compliance and the proper functioning of all systems in flight. This phase has been validated for the first of the 60 Airbus A220-300s ordered by the company to replace its Airbus A318 and A319 on the short and medium-haul networks.

With the assembly of our first @Airbus #A220 now complete, it made its first test flight yesterday! https://t.co/cydulLlljz pic.twitter.com/F9K0eAJzFO


Although its official entry into the Air France fleet isn’t scheduled until the end of September, the Air France Airbus A220 will fly again to validate another major phase in the delivery process, i.e., the customer acceptance flight.

During the flight, the Airbus teams, this time accompanied by Air France teams, will check the aircraft’s compliance with the specifications defined by Air France. This new phase will mark the start of the training flights in real conditions before the first commercial flights.

With a capacity of 148 seats and an operating range of 2,300 nautical miles, the A220-300 is perfectly suited to Air France’s short and medium-haul network.