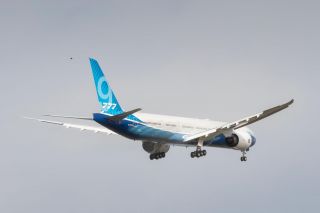 SEATTLE - Boeing took a hefty $6.5 billion charge on its all-new 777X jetliner as it posted a record annual loss on Wednesday due to the coronavirus pandemic and the aftermath of a two-year safety crisis over its 737 MAX. The delivery of the first 777-9 will slip to the end of 2023 according to a Wednesday filing.

The coronavirus crisis has exacerbated a drop in demand for the industry’s largest jetliners, with airline customers shunning deliveries of planes due to international travel restrictions, hurting cash flow at the U.S. planemaker.

Boeing said it now expects the 777X, a larger version of the 777 mini-jumbo, to enter service by late 2023, delaying the jet’s entry for the third time, due to tougher certification requirements after the 737 MAX safety crisis and plummeting demand.

The company has been developing the widebody jet with the goal of releasing it in 2022, already two years later than planned.

"2020 was a year of profound societal and global disruption which significantly constrained our industry,” Boeing Chief Executive Dave Calhoun said in a statement accompanying results. Boeing shares fell 4.5% in premarket trading to a more than two-month low of $193.

A historic slump in air travel and expanded inspections over production defects halted deliveries of dozens of 787s to airlines, cutting off a key source of cash just as Boeing works to clear an inventory of about 450 737 MAX jets.

Boeing said it expects to resume handing over 787s to customers at some point in 2021, though deliveries were not expected to recover to 2019 levels until at least 2024, according to analysts.

Boeing reaffirmed plans to hit a sharply-reduced production rate of 5 787s per month in March, when it will consolidate production at its South Carolina factory, a decision first reported by Reuters.

Boeing is also sticking with plans to reach a production rate of 31 737 jets per month by the beginning of 2022, though at least one analyst expects that to slip to early 2023.

Boeing also said it delivered an additional 13 737 MAX airplanes in January so far from its stored inventory, adding to the 27 aircraft it shipped in December after the U.S. cleared the jet to fly again.

The European Union Aviation Safety Agency (EASA) lifted its own 22-month 737 MAX flight ban on Wednesday, following a move by U.S. counterparts in November and Brazil and Canada afterward.

China, which was first to ban the plane after the second crash in March 2019 and which represents a quarter of MAX sales, has not said when it will act.

On Wednesday, Boeing reported a $744-million charge related to a previously-announced agreement with the U.S. Justice Department to resolve a fraud conspiracy charge over the MAX’s development.