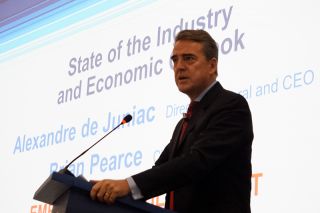 NEW YORK - Rules governing airport slots should be suspended immediately in light of the disruption to flight schedules caused by coronavirus to prevent airlines being penalised, industry body IATA said on Monday. The global airline industry is expected to lose billions of dollars in business.

Takeoff and landing slot rules mean airlines must fill at least 80% of their slots in any given season, or risk losing their allocation next time round.

But dozens of airlines have cancelled flights to China and cut services to other countries such as Singapore and Italy as a result of the outbreak and IATA said national regulators should relax slot requirements given these exceptional circumstances.

"We are calling for regulators worldwide to help the industry plan for today's emergency, and the future recovery of the network, by suspending the slot use rules on a temporary basis," IATA CEO and Director General Alexandre de Juniac said.

"There are precedents for previous suspension of the slot use rules and we believe the circumstances again call for a suspension to be granted," he said in a statement.

Airlines globally stand to lose $1.5 billion this year because of the outbreak, an IATA official said earlier on Monday.

Shares in the airline sector have been rocked by the spread of the virus and British Airways owner IAG and Finnair both said last week the outbreak would hit profits.

"Given these extraordinary circumstances as a result of the public health emergency, the collective view of the airline industry is that the application the 80% rule during the upcoming season is inappropriate," IATA said in a statement.

"Flexibility is needed for airlines to adjust their schedules according to extraordinary demand developments."
© Reuters, aero.uk | Image: IATA | 03/03/2020 07:40