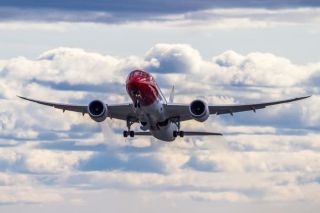 LONDON - Norwegian Air shares lost more than a quarter of their value on Friday on concerns about its ability to weather a dramatic drop in global travel as the coronavirus spreads. The airline is highly exposed while some analysts begin to question Norwegian Air`s financial health.

Pareto Securities cut its rating on the airline's stock, saying it was concerned about weak cash reserves and the risk it may have to issue new shares to shore up its finances. Norwegian Air declined to comment.

Analysts have warned that Norwegian, which has expanded the low-cost carrier model to long-haul, could be particularly vulnerable due to its high debt levels.

The airline has already raised 5.4 billion Norwegian crowns via three share issues in two years, as well as a convertible bond, to help shore up its finances.

Debts and liabilities amounted to 81.2 billion Norwegian crowns ($8.79 billion) at the end of 2019, while cash and cash equivalents stood at 3.1 billion crowns.

In 2018, Norwegian rebuffed takeover offers from British Airways' parent company IAG, which has since said it was no longer interested in buying the ailing carrier.

Norwegian's convertible bonds have so-called covenants linked to the finances of a key subsidiary, Arctic Aviation Assets (AAA), which must keep its book equity and debt levels within certain minimum levels.

Norwegian scrapped its 2020 earnings outlook and cut some transatlantic flights on Thursday, blaming the coronavirus outbreak. Norwegian Air's shares were down 25.5% at 11.80 Norwegian crowns ($1.27).

The stock has fallen almost 70% since the start of February, making it the hardest hit among European airlines, as the virus spread to Europe and the United States, forcing airlines to cut flights and costs and warn of a hit to earnings.

"There is clearly a risk for all the airlines, but we see Norwegian with a slim cash buffer perhaps at a (bigger) risk," Pareto Securities analyst Kenneth Sivertsen told Reuters, pointing out that it may require new equity. He cut the stock to "hold" from "buy" and slashed its price target to 15 crowns from 50.
© Reuters, aero.uk | Image: Norwegian | 09/03/2020 07:51