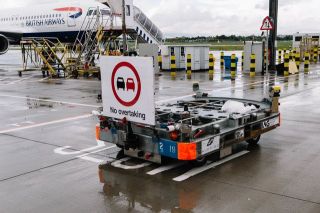 LONDON - As part of its ongoing £6.5bn investment for customers, British Airways is trialling autonomous, emissions-free baggage vehicles at its home at Heathrow, to help the airline further improve punctuality and depart every flight on time.

British Airways currently operates up to 800 flights a day to and from Heathrow, transporting around 75,000 bags back and forth between its baggage halls and aircraft.

Now, in what is believed to be a world first, the airline, in conjunction with Heathrow Airport and autonomous vehicle specialist, Aurrigo, is trialling driverless baggage vehicles.

Carrying up to 40 bags in one journey, the driverless dollies use latest navigating technology to memorise the airfield to determine the shortest route to transport luggage. Unlike the current vehicles, the new autonomous dollies will depart for the aircraft as soon as each one is full, speeding up the aircraft loading process.