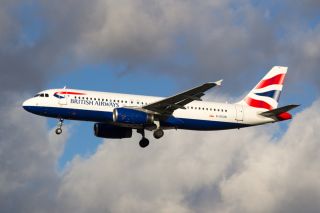 LONDON - In the middle of a descent, the first officer notices a strong smell of onion bhajis. Minutes later both pilots of the Airbus A320 struggle with looming incapacitation - a British Airways flight to Greece is subject to an air accident investigation by authorities.

Neither the captain nor the first officer answer the calls. At this time, both pilots fight symptoms of incapacitation in the cockpit, according to a report by "The Aviation Herald".

A strong smell of "onion rings" is noticed firest by the first officer, 30 seconds later the pilot`s arms and legs tingle. Before he faints, the F/O can put on the oxygen mask and advise the captain about his state of physical faint. He does not receive an answer from the left seat.

On the threshold of incapacitation, the captain also puts on his oxygen mask and slowly recovers to consciousness. The pilots work through the checklist for smoke, fire and fumes and establish communication with air traffic control again. The Airbus lands safely in Paphos 13 minutes after the incident.

Flight attendants and passengers have no clue of the danger they are exposed to for the entire time. Right after landing, the pilots open the cockpit windows, but one flight attendant still reports a strong "fuel smell" coming out of the open cockpit door and a rather pale co-pilot later.

In Cyprus, doctors examine low oxygen saturation in the pilots' blood. The incident is now investigated by British air accident authorities. The involved Airbus A320 G-GATL returned to London Gatwick after 27 hours in Cyprus and is currently back in service.
© aero.uk | Image: Ingo Lang | 25/11/2019 10:12