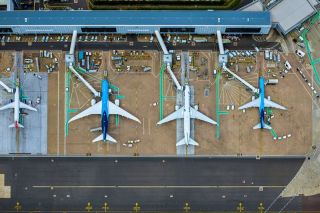 LONDON - As the Unmanned Aircraft Bill goes before parliament for a second reading, the British Airline Pilots Association (Balpa) says new European research backs the union`s concern that the number of private drone flights in controlled airspace is being "underestimated".

The research by Eurocontrol involved comprehensive monitoring of airspace around the Latvian airport of Riga. Latvian airspace has similar restrictions on drone operations to the UK and Riga has a similar number of movements to Luton airport with the same single-runway configuration.

In a 37 day period, the study recorded 171 drone flights, of which 159 (or 91 percent) were considered illegal because they broke national regulations such as height limits or rules regarding how close to an airport you can fly. 71 drone flights were detected closer than 5km to the runway during the monitoring period, and 75 were detected above 400ft.

Balpa`s flight safety department says these results are worrying and show that regulation alone is not enough. Training, education and enforcement of drone laws is also vital, as is a means for drones to be electronically identifiable.

With this is mind, Balpa says the increased police enforcement powers contained in the proposed unmanned aircraft bill are welcome. The pilots union wants to see a similar monitoring study here in the UK, to identify the actual presence of drones in the vicinity of a UK airport.

"Pilots have always feared that their reported sightings of drones are just the tip of the iceberg and this study backs that concern," said Balpa flight safety specialist Joji Weites. "The results indicate that regulation alone is not enough, and training, education and enforcement are equally important. That’s why Balpa has welcomed the increased police enforcement powers in the proposed Unmanned Aircraft Bill."

The pilots would also "like to see a similar study of drone usage in controlled airspace, carried out in the UK," according to Waites. "At the moment we can’t be sure how many drones are operating at any time and that makes it difficult to ensure the right measures are in place to integrate them safely."
© aero.uk | Image: Gatwick Airport | 01/02/2020 17:34