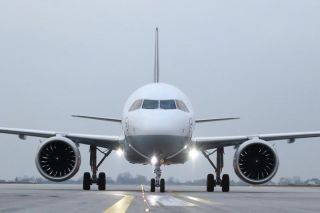 HAMBURG - Airbus is studying a sharp cut in production of its single-aisle A320, its biggest-selling family of jets, to accommodate industrial and delivery problems triggered by the coronavirus crisis, three people familiar with the matter said.

Two of the people said Airbus may have to cut its official monthly of 60 A320-family jets by as much as half for one or two quarters to avoid a glut of undelivered jets.

The third said no decision had been taken on a reduced figure. A final decision is expected before the company's shareholder meeting in mid-April.

An Airbus spokesman declined to comment, but said the company was in constant dialogue with suppliers and airlines. On Thursday, Reuters reported that both Airbus and Boeing were also studying sharp cuts in wide-body production.

Airlines worldwide have grounded fleets and stopped taking deliveries of most new aircraft due to cash shortages and travel restrictions that have both hurt travel demand and interrupted the logistics of sending inspectors and pilots to take new jets.

At the same time, Airbus faces shortages in its own supply chain as it struggles to bring production back up to previous levels after pausing activity in several factories.