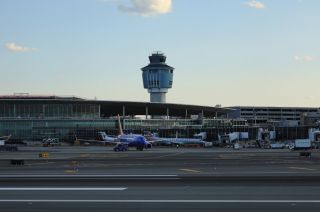 WASHINGTON - The Federal Aviation Administration aid on Monday it would extend temporary waivers of minimum flight requirements at some major U.S. airports through late March 2021 because of the coronavirus pandemic.

Airlines can lose their slots at congested airports if they do not use them at least 80% of the time. The FAA said it would extend the waivers at New York's John F. Kennedy and LaGuardia airports and Ronald Reagan Washington National Airport that were set to expire in October.

At four other U.S. airports where the FAA has a formal schedule-review process - Chicago O’Hare, Newark, New Jersey, Los Angeles and San Francisco - the agency proposes to extend credits to airlines for flights that were canceled due to the coronavirus as though those flights were operated through Dec. 31.

Major airline groups cited "historically low levels of bookings, with overall bookings down 82% year-on-year for 2020 compared to the outlook for 2019; consumer demand that continues to fall ... and the need for schedule flexibility to support sustainable loads."

The FAA, which first proposed the extensions on Sept. 11, said on Monday it "seeks to ensure the efficient use of valuable aviation infrastructure and maximize the benefits to both airport users and the traveling public."

United Airlines praised the FAA decision "to harmonize procedures and timelines for all airports, which will help provide more stability and certainty during this historic pandemic."

Spirit Airlines said it opposed the FAA’s proposal in its entirety as "unacceptably protective of dominant incumbent carriers at the expense of the traveling public and of low-cost carriers ready and willing to serve."
© Reuters, aero.uk | 06/10/2020 07:36