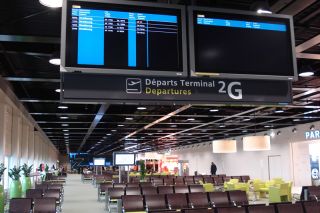 PARIS  - Aeroports de Paris, operator of the French capital's main airports, cut its full-year passenger traffic outlook on Friday as a second wave of Covid-19 infections gathers pace. The airport group will be increasing testing capacities at its airports but will not provide any guidance on future passenger target.

Traffic at Charles de Gaulle and Orly will fall 65-70% rather than the previously forecast 63%, ADP said as it posted January-September revenue of 1.67 billion euros, down 53%.

ADP, which also holds stakes in international airports in countries including Turkey and India, said aviation and retail revenue both fell by more than half in the period.

Traffic has suffered a "new strong decrease" in recent weeks, Chief Financial Officer Philippe Pascal said, "as a consequence of the new wave of epidemic around the world."

ADP is rolling out Covid-19 testing at the Paris airports, but Pascal declined to comment on the target passenger capacity. Plans to expand main gateway Paris CDG by a Terminal 4 by 2030 are under review.
© Reuters, aero.uk | Image: Aeroports de Paris | 26/10/2020 07:37