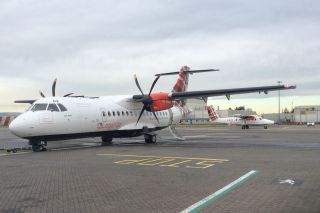 BRISTOL - Loganair is "safeguarding" a popular air link between City of Derry Airport and Liverpool following Ryanair's recent decision to step back from the route. The regional airline will also start a new 70 minute connection between Bristol and Teesside. Both services start on 24 May.

Loganair returned to Teesside - under its new ownership - on 1 February after an absence of over two years. In a short time, the airline is already well established on the key route to Aberdeen, has added London Heathrow flights and is introducing flights from Teesside to Belfast City, Dublin, Jersey and Cornwall Airport Newquay over the coming weeks.

"We are very pleased to expand our commitment to Teesside International with this direct service to Bristol," Loganair CEO Jonathan Hinkles said. "We're sure that the new connection will be warmly welcomed by customers travelling for work reasons and by those - just as soon as they can - travelling to visit friends and family."

The new Loganair link from City of Derry to Liverpool will initially offer flights on four days of the week: Monday, Friday, Saturday and Sunday. "The frequency of flights will increase to daily from late June," Loganair said in a press release.

This new route follows close on the heels of confirmation by the Department for Transport of continued funding for the City of Derry to Stansted PSO route.

"Frequent air links are essential for so many aspects of working and family life, even as we work to re-build and recover from the Covid-19 pandemic," Hinkles said. "Loganair already serves both City of Derry and Liverpool airports, and when the opportunity arose for us to connect these two important destinations in our network following another airline's withdrawal, we were only too pleased to step in to safeguard these connections."
© aero.uk | Image: Loganair | 13/03/2021 12:42