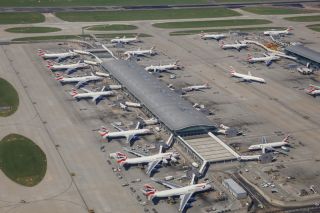 LONDON - Heathrow Airport tried to pass on its pandemic losses to airlines - the controversial request to increase charges by up to ten percent to recover 2.6 billion pounds over the next few year was rejected by British aviation regulator CAA Tuesday. Yet, neither the airport nor airlines are happy with the decision.

The crisis saw Heathrow's traffic nosedive from 80.9 to 22.1 million passengers in 2020. The airport suffered a loss of 2.0 billion pounds - and asked CAA to approve a steep increase of charges by relaxing the Regulatory Asset Base pricing confinements.

"Due to the effect of the pandemic, Heathrow Airport requested an adjustment to its Regulatory Asset Base (RAB) of 800 million pounds now and a total of 2.6 billion  at the end of 2021," the CAA said Tuesday. "This would be recovered through airport charges from 2022."

The regulator agreed to only a fraction of this - 300 million pounds. "We have taken the decision that an early intervention on the scale of its request is disproportionate and not in the interests of consumers," CAA director Paul Smith said.

Heathrow argued the tight cap might undermine foreign investor confidence in UK regulated businesses, while British Airways showed disappointment about the 300 million pound fees increase. "Heathrow is the most expensive hub in the world", the airline said in a statement.
© aero.uk | Image: Heathrow Airport | 28/04/2021 12:32