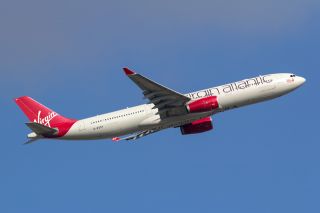 LONDON - The crisis erased a third of the revenue of Virgin Atlantic. The airline takes steep restructuring steps after posting a loss of 911 million pounds for 2020. Virgin Atlantic hopes to have all its fleet back up in the air by October or November this year, chief executive Shai Weiss said.

Virgin Atlantic saw its revenues fall from 2.9 billion in 2019 to 868 million pounds in 2020. The airline raised 1.5 billion pounds in capital, deferred fleet investments and cut its fleet.

"Decisive action was taken to resize and reshape Virgin Atlantic," the airline said. The measures included "consolidating operations to London Heathrow" and  "simplifying the fleet by retiring Boeing 747-400 and Airbus A340-600 aircraft early".

Virgin Atlantic hopes for recovery to speed up later this year. "We are by no means out of this situation," Weiss said last week. "We will only be satisfied, or at least know that we really move a notch, when all our planes are in the sky, we turn as many people back into flying and operating our flights, which I expect that to be in October or November of this year."
© aero.uk | Image: Ingo Lang | 03/05/2021 07:55