"There is no worse owner than the state" 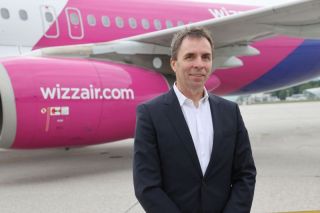 SEATTLE - His airline could be grounded for three years and still have financial resources for a restart: Wizz Air-CEO Jozsef Varadi shows confidence in his position as European air travel starts to recover. Wizz Air will will keep focusing on short haul cost travellers - and expects more capacity this summer than two years ago.

"What we know about the business traveller is that the business
traveller pays a lot of money in good times and pays nothing in the bad
times. So if there is an economic crisis, the first thing corporates do –
they cut travel budgets", Varadi said in an interview with CAPA - Centre for Aviation.

That is why his airline will resist any temptation to try to fetch some business travellers during the recovery of the industry. "We know how to deliver a very efficient intra-European or short-haul point-to-point traffic at very low cost by minimising complexities of the execution of the business", he said.

Therefore, according to Varadi, the fleet has been growing during the pandemic from 121 aircraft in March 2020 to 140 today (June 2021). He aims to further grow capacity by upgrading the fleet from A320 to A321.

The resulting reduction of unit costs will boost Wizz Airs standing in the competition with airlines that were kept afloat with state aid through the pandemic.

"There is no worse owner than the state", Varadi said. "We are talking about in excess of a hundred billion dollars put into the industry, and that money has nothing to do with restructuring the industry to make the industry a better place, but it is just covering status quo."

With states returning to invest in Airlines, Varadi predicts higher costs and fees for those Airlines depending on them.

Wizz Air, for her term, took the chance to negotiate better conditions with airports. "We have had dozens of airports coming to us pretty much begging for capacity", Varadi said. "And we've been able to come up with airport arrangements, which wouldn't been available to us under normal circumstances."

In Varadis view, short haul travel is a commodity, "and in commodities, lowest-cost prevails, lowest cost wins." Recovery up to now for Varadi seems more like a roller coaster than a steady line. But he presents himself confidently: "If you look at the liquidity we have on hand today, this airline can be grounded completely as of tomorrow and we would still be in business three years from that."
© aero.uk | Image: Wizz Air | 23/06/2021 12:03