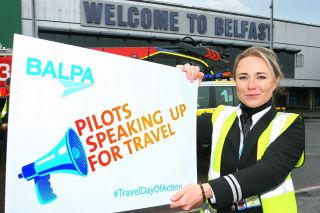 LONDON - British pilots are urging politicians across the UK to pressure the Government to save the summer and secure the future for the national aviation and travel industry. According to pilot union Balpa and Eurocontrol data inbound and outbound UK travel collapsed by three-quarters through the crisis.

As part of a "Travel Day of Action" on Wednesday, pilots were taking their message to MPs in Westminster, MSPs in Holyrood and MLAs in Stormont and taking part in activity at Bristol, Belfast, Manchester, Luton and Heathrow airports.

"The UK aviation industry is the hardest hit in Europe by restrictions on international travel," pilot union Balpa said and calls to "introduce a robust, science-based approach to opening-up safe travel, extend the furlough scheme and provide direct financial support to save jobs."

A Balpa analysis of data from European air traffic agency Eurocontrol showed that the number of flights into and out of the UK has collapsed by three-quarters (73 percent) in the latest official data, compared to 2019. The data shows that Gatwick and Manchester airports are the worse affected in Europe, with Heathrow and Stansted close behind.