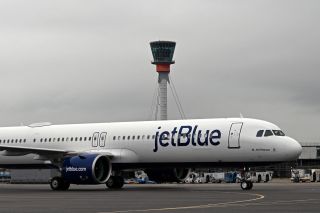 007 arrived at Heathrow Airport: JetBlue Airways will maintain a daily A321LR service under the flight number (007 inbound, 020 outbound) between New York and London through September before switching to a four flights per week roster.

"For the first time in JetBlue’s 21-year history we are crossing the North Atlantic and competing in one of the busiest travel markets in the world," said Robin Hayes, chief executive officer, JetBlue. "Our flights are well timed to meet the pent up demand for travel between our two countries."