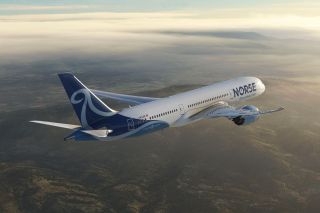 LONDON - Norse Atlantic Airways and the British Airline Pilots Association (Balpa) have entered into an agreement that will deliver hundreds of jobs in the UK. Norse plans to commence affordable flights between Europe and North America in 2022 with a fleet of Boeing 787 aircraft.

Norse Atlantic Airways braces for a bold EIS with new routes from Oslo, London and Paris to US destinations. According to industry sources and British union Unite the airline mulls a Gatwick base and will start hiring soon.

"We are thrilled to be collaborating with Balpa to offer pilots the opportunity to return to the cockpit and create hundreds of new jobs in the UK, especially following a tough time for the entire aviation industry," Norse CEO Bjorn Tore Larsen said.

"This is a glimmer of hope for the struggling UK aviation industry that is much needed", Balpa National Officer Terry Brandon said. "Our negotiating team has been incredibly impressed with the company’s business plan as it will provide sustainable long-term careers for our members on its transatlantic route network.
© aero.uk | Image: Norse Atlantic Airways | 30/09/2021 09:15