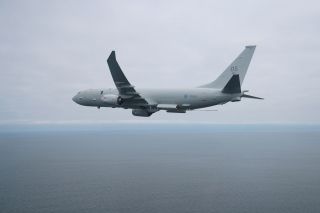 LOSSIEMOUTH - The RAF’s new Boeing P-8A Poseidon Maritime Patrol Aircraft based at RAF Lossiemouth was launched on Search and Rescue duties for the first time this month as they helped rescue two transatlantic rowers. The P-8A crew coordinated a merchant vessel to the stricken rowers.

HM Coastguard established that the two Faroese crew members had taken to a life raft after their rowing vessel had capsized and sunk. After communicating with merchant vessels in the area a ship, the Nordic Qinngua, made its way towards the stricken rowers.

On reaching the scene, the crew of the Poseidon were able to communicate with the merchant vessel and relay information back to UK mission controllers to help coordinate the rescue efforts.

The Poseidon crew from "Guernsey’s Own" 201 Squadron were resting for an evening mission when they were called in early to respond to the emergency transmission from the life raft. The crew arrived on the scene at 11:45am, establishing communication with the merchant ship and visual contact with the life raft.

"We were able to get eyes on with the merchant ship and the lifeboat in good time which allowed us to relay their positions back to the UK," Flight Lieutenant Daz Williams said. "The conditions made rescue very difficult but thanks to some skilful manoeuvring, the ship managed to bring the life raft alongside and recover the rowers."
© aero.uk | Image: RAF | 26/08/2022 10:05