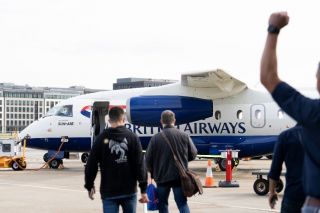 LONDON - Following a summer where 70 percent of the aiport's passengers were travelling for leisure, London City expects business traffic to rebound through the winter season. The airport just saw the return of Sun-Air with its service to Billund, while British Airways switches from leisure to business routes.

The Danish carrier, who operates under a franchise agreement with British Airways, once again brought its 32 seat Dornier Do328 back to London City and will offer six flights per week from London to the home of Lego.

"Sun-Air has launched a schedule focussed on business travel between London and Billund, with convenient flying times, a full service onboard and the opportunity for BA Executive Club Members to earn tier points and Avios," the airport said.

The return of Sun-Air, after a two-year Covid forced hiatus, comes as London-City gears up for an increase in business travel.

"Other carriers such as Swiss and Lufthansa will make similar adjustments, with 38 weekly rotations to Zurich and 36 to Frankfurt from September onwards", the airport said.
© aero.uk | Image: London City Airport | 09/09/2022 13:14